If anybody is tempted to think that I’m the lost sheep and retired from my sinful life I have to disappoint you. I’m fine! But we literally found some lost sheep today! I joined up a very nice local and we went for an awesome hike with the secondary mission target of finding some lost sheep from her fathers flock. We actually found the majority of them and brought them home safely which came quite unexpected for both of us. 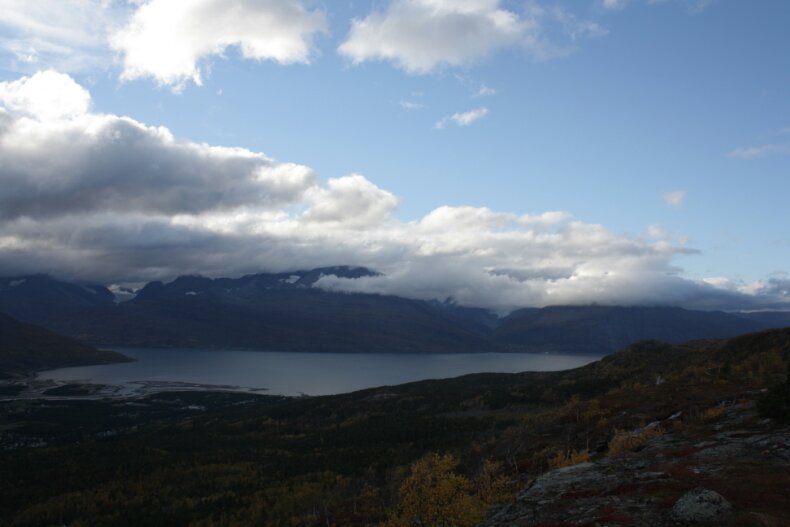 The view down to skibotn 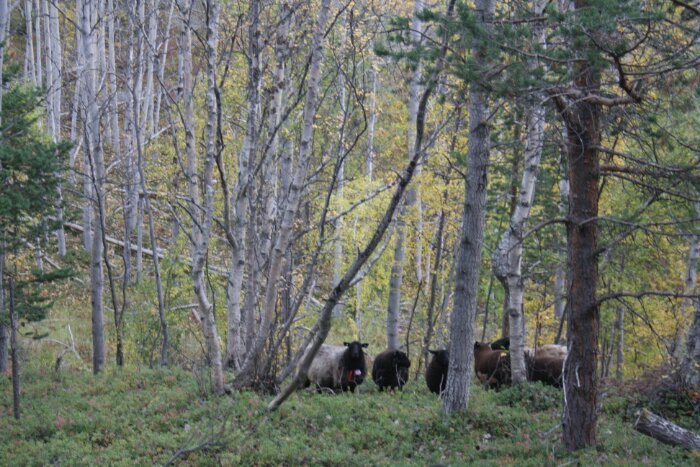 The sunset yesterday is also worth noting, all these mountains and glaciers really improve the overall impression on the scenery. The northern lights were just ordinary so I didn’t even bother to take a photo. What a spoiled bitch I am… 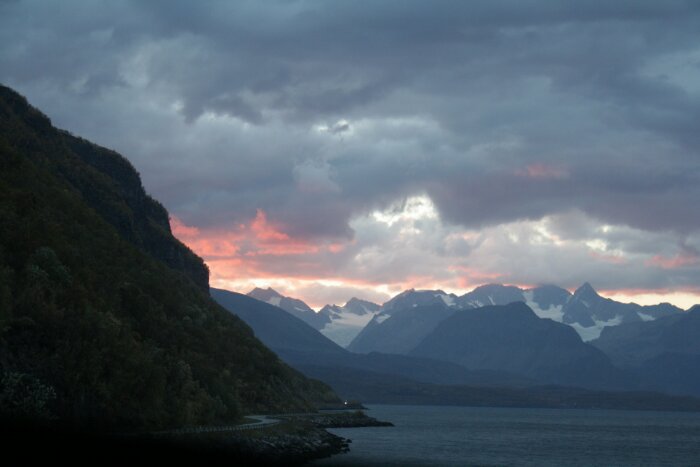 Wrong parking lot, I advanced around the corner later but actually too late

Ah yeah, I also learned something about the nature today: There are wolves and bears over here. So there is a minimal chance for me to end up as a snack! He gave his life for what he loved 🙂

And the trekking boots already paid off, chasing sheep through wet terrain would have meant soaking wet feet. Sometimes the mud/sump was more than ankle deep… 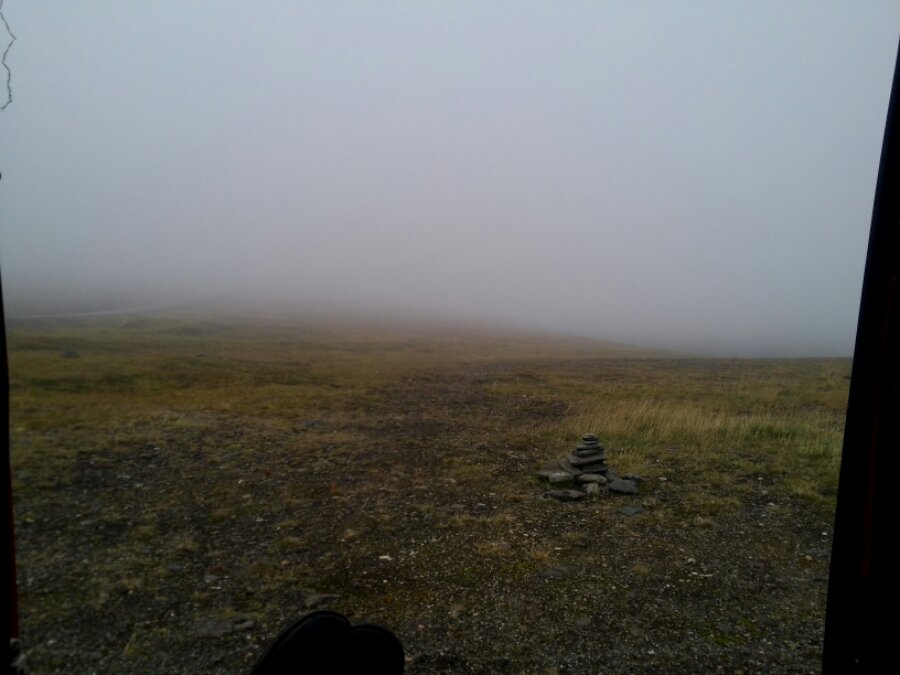 The view of the north cape from my current position

The most northern hike of the world is (according to the interwebs) famous for it’s beautiful view of the touristy north cape. At the moment (10:00) it’s ten degrees inside the van, probably less outside, winds are reported at 30kp/h, I would estimate the gusts on 60+ the way the van is shaking. As you can see on the picture the cloud base is so low that there is no view of the northern cape and rainfalls are reported to start around noon. So if I’m fast & lucky I won’t get wet and see nothing. One part of my brain says: Hey, that’s the perfect opportunity to test your rain gear and last but not least you came here to see the cape. Another says that I should screw it, there’s plenty better hikes south and it will rain there as well. Hmmm, let’s put it in these words: 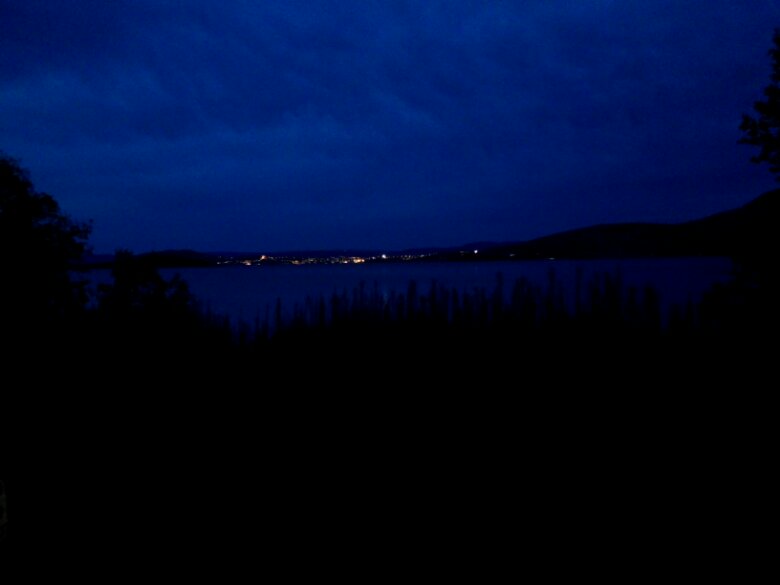 The city of Alta. Civilization!

For the caravan traveller rainy days are designated driving days. And the day turned out as rainy as the forecast suggested. Better skip a shitty hike in the rain and rally south to spent some good days at a nice fjord! I didn’t drive that far south but more to the west but already the weather is improving (13deg C at 20:00) and there are trees as well as leaves on them.

The one thing qualifying as a sight over here (besides all the beautiful nature, Townes, islands, …) is the most northern point of continental Europe. As we’re already established there are three of them and I just finished to touristy one. So the trip is finished concerning the fixed plans. I met D. in Stockholm and visited “the” North Cape. 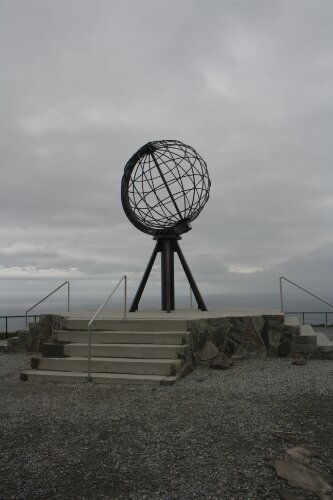 I turned up at 14:30 and there was still somebody sitting inside it. Luckily Eva and Hekki told me that it’s for free after the opening hours of the cinema (dafuq?) and the restaurant. So I turned around and returned an hour later. The guy was just stepping outside the booth and made a gesture I didn’t understand. Since he didn’t try to stop me I just drove on and he seemed reasonably fine with it. Later I found out that just entering the area is 20€ and “all area access” to the facility is 30€. Per person. 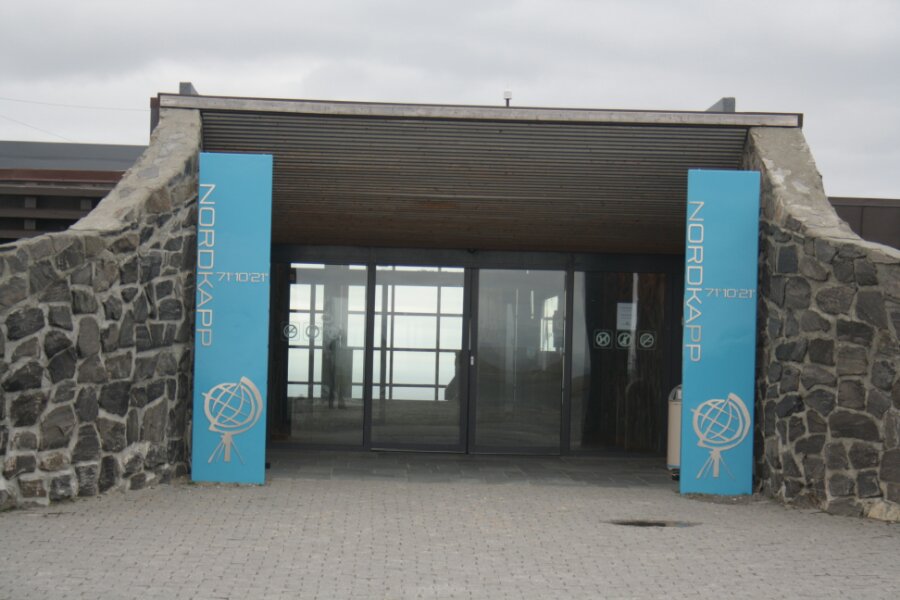 The same trick as with the arctic circle: Just show some GPS coordinates and you're legally safe concerning the little problem that it is not the real deal....

As far as capes go this is quite a usual one, it’s windy, there’s nothing to see but ocean on one side and you got a nice little cliff on which you’re standing. Tourists playing around with the monument (some globe), taking zillions of pictures. The facility is quite large, a restaurant seating 200 and an auditorium for 300 (if I remember right). So yeah, you can do some business meetup over here as well. All in all it’s quite boring, more an item to cross of some list than anything special. Tomorrow I’ll maybe try the worlds most northern hiking trail if the weather is not too rough. At least the end of the trail didn’t look too interesting. 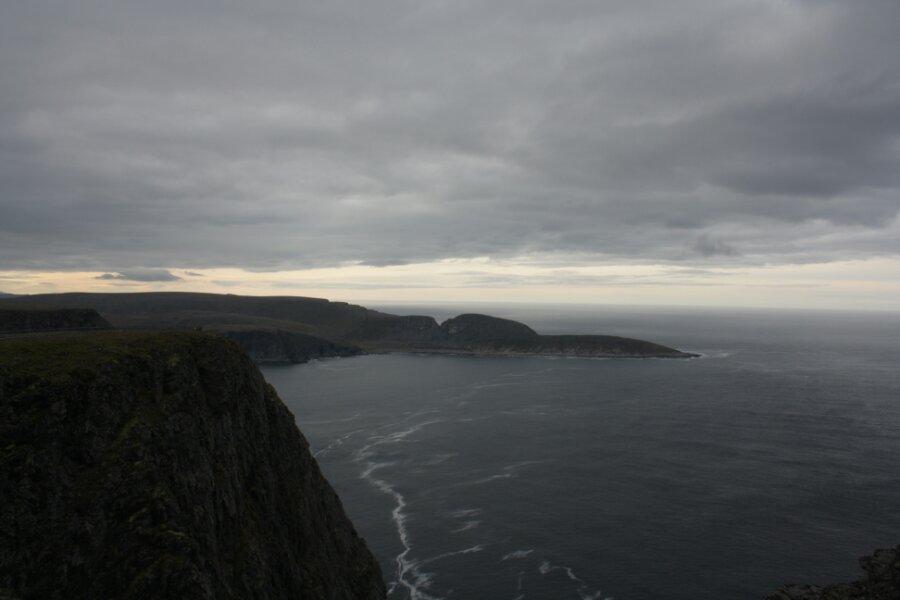 Some place nearby which is further north than the north cape...

All in all I share the opinion of the people I asked about it: Not a recommendation, it’s no use going there. Especially in Summer because the payment booth is open until 2am or so and in Autumn because it’s 150km north of the tree line so there’s not much going on concerning colors…

I wanted to post this two weeks ago but I wasn’t in the mood to edit the pictures and I thought the text isn’t really catching it. Since waiting doesn’t change stuff I’ll just leave it as it is… 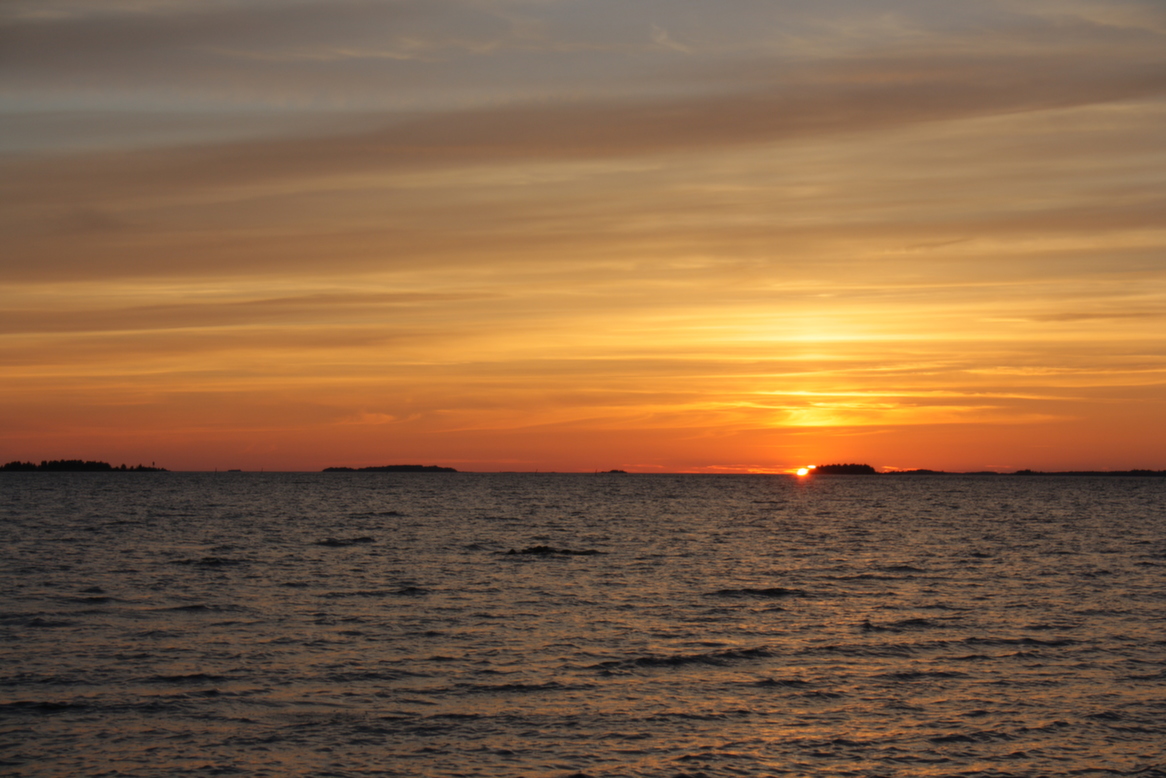 Oulu more or less did the trip for me. I met nice folks before and a saw beautiful nature for sure. But here there were also fun/cultural events and literally everything happened at once. I was there for about a week and didn’t spend a single day alone. I roamed around the arts night with different folks and had a beer at often recommended “never grow old” bar. I watched the air guitar champignonships and met folks who instantly felt like we had been friends for ages. I ate the local mayonnaise pizza, drank beer in a private sauna, had two campfires (one with BBQ, one with roasted bread), enjoyed art installations at a park and kissed at sundown. I rode the ferry to Hailuotu Island, saw northern lights on four different evenings and even showed a local her first northern lights (talked about it and half an hour later I just pointed at the sky). And these were only the opportunities I took, I missed quite some stuff as well 🙂 I could have stayed there for weeks but the comming autumn pushed me further north.

To cut a long story short: I’ll be back. 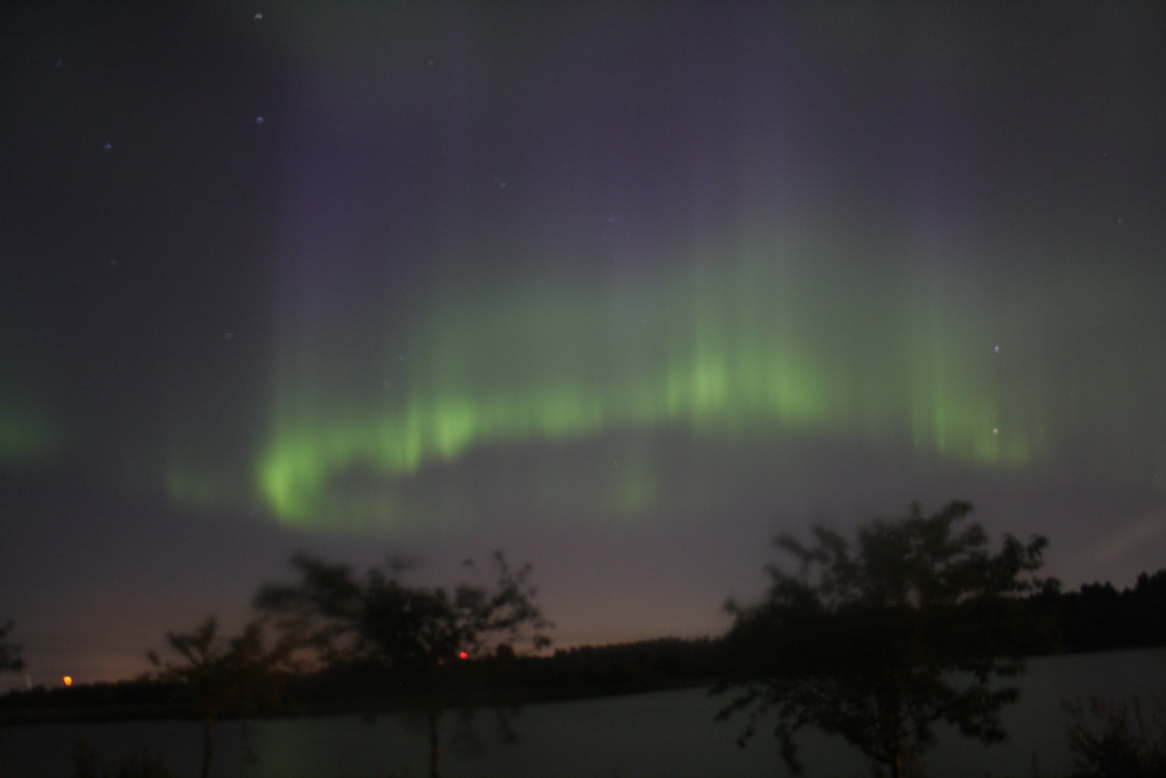 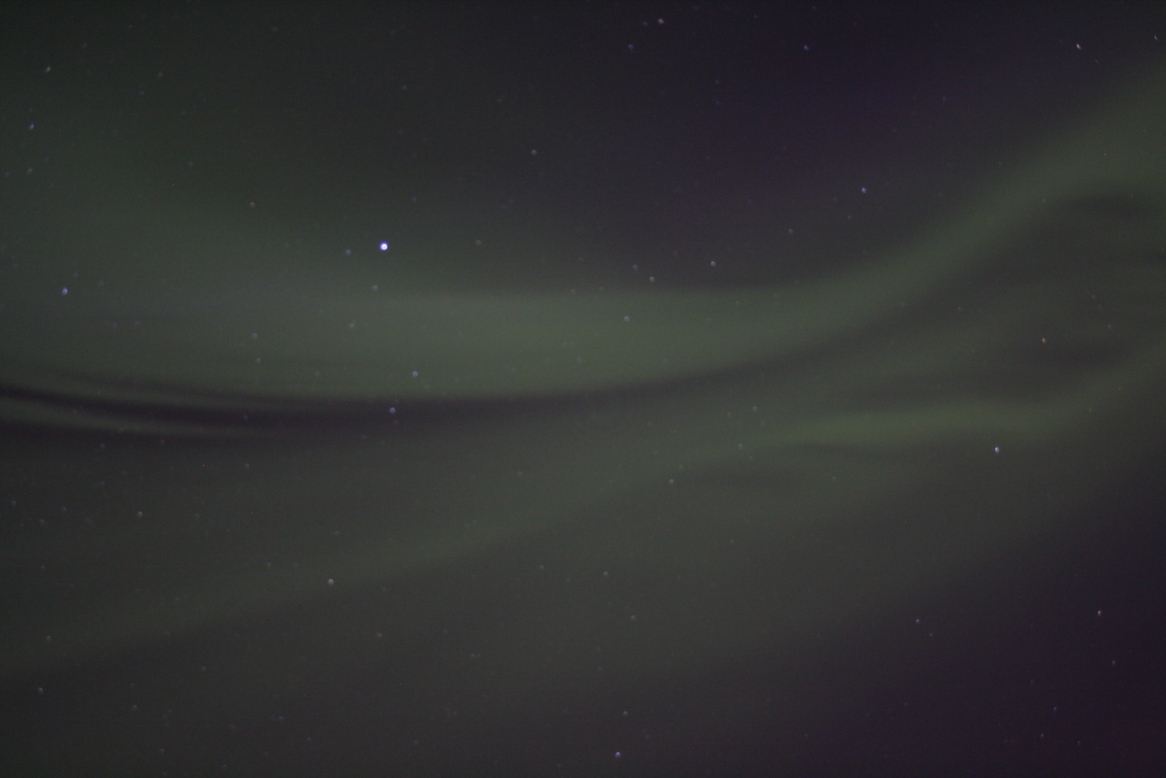 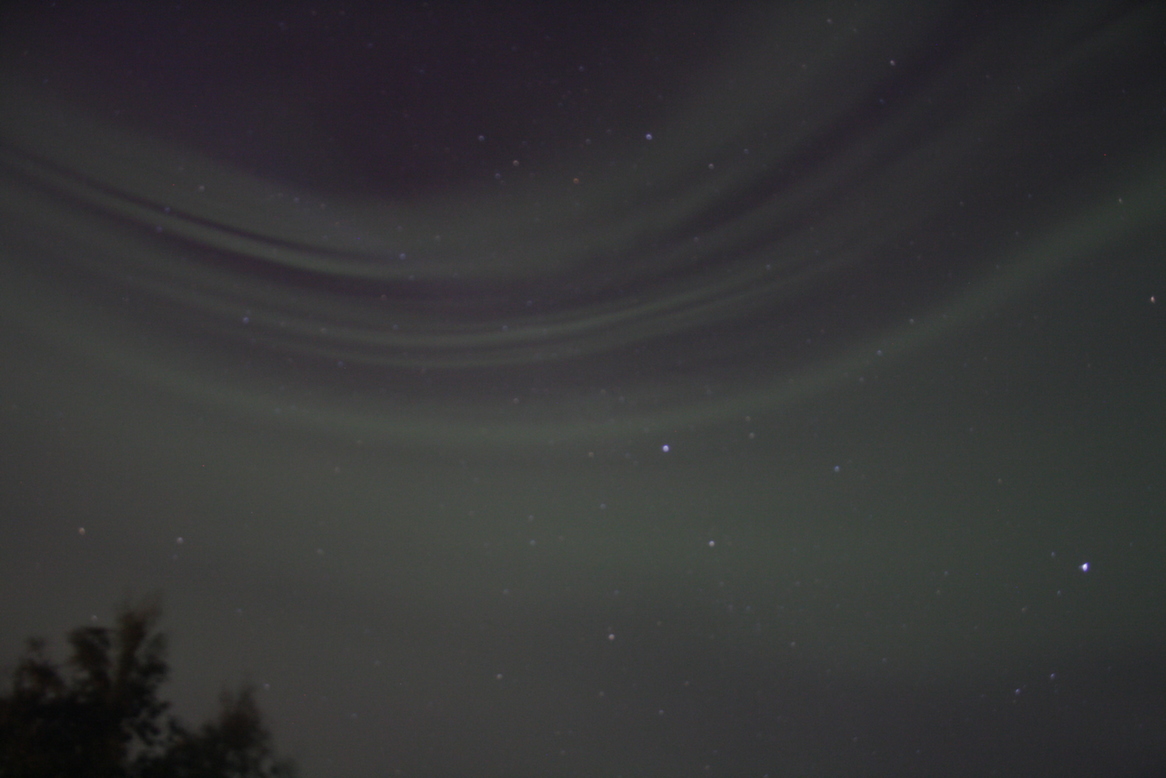 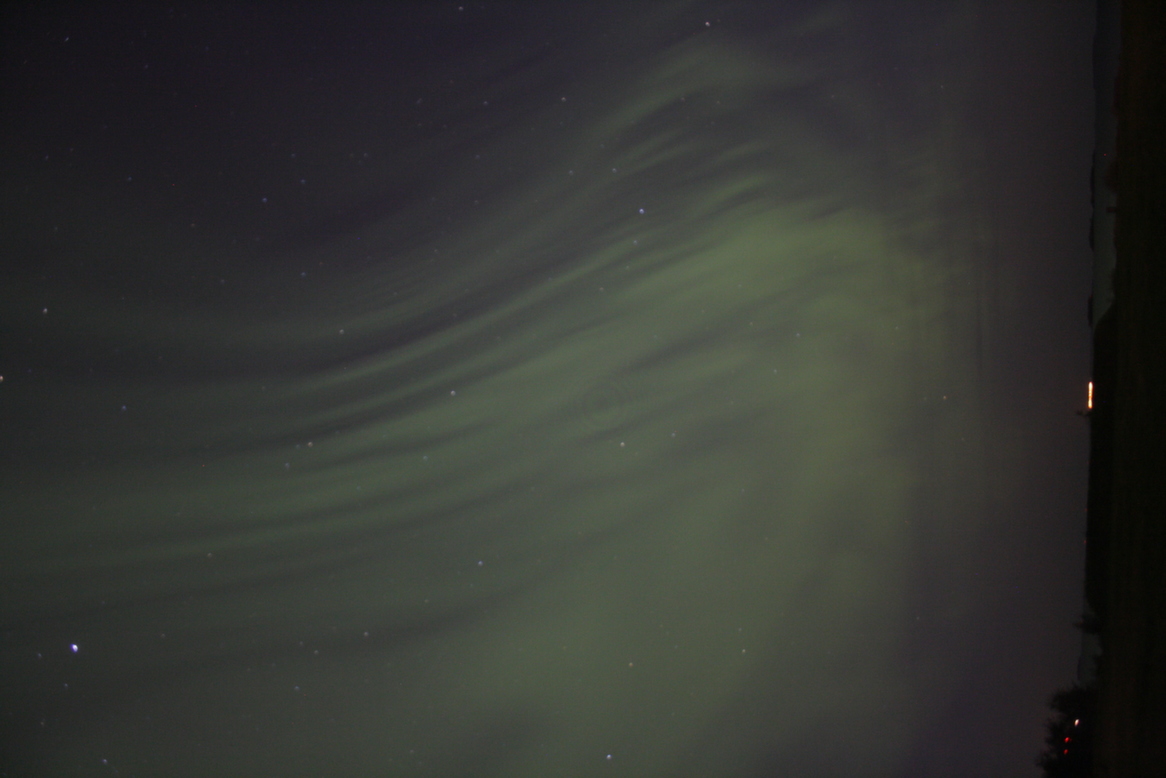 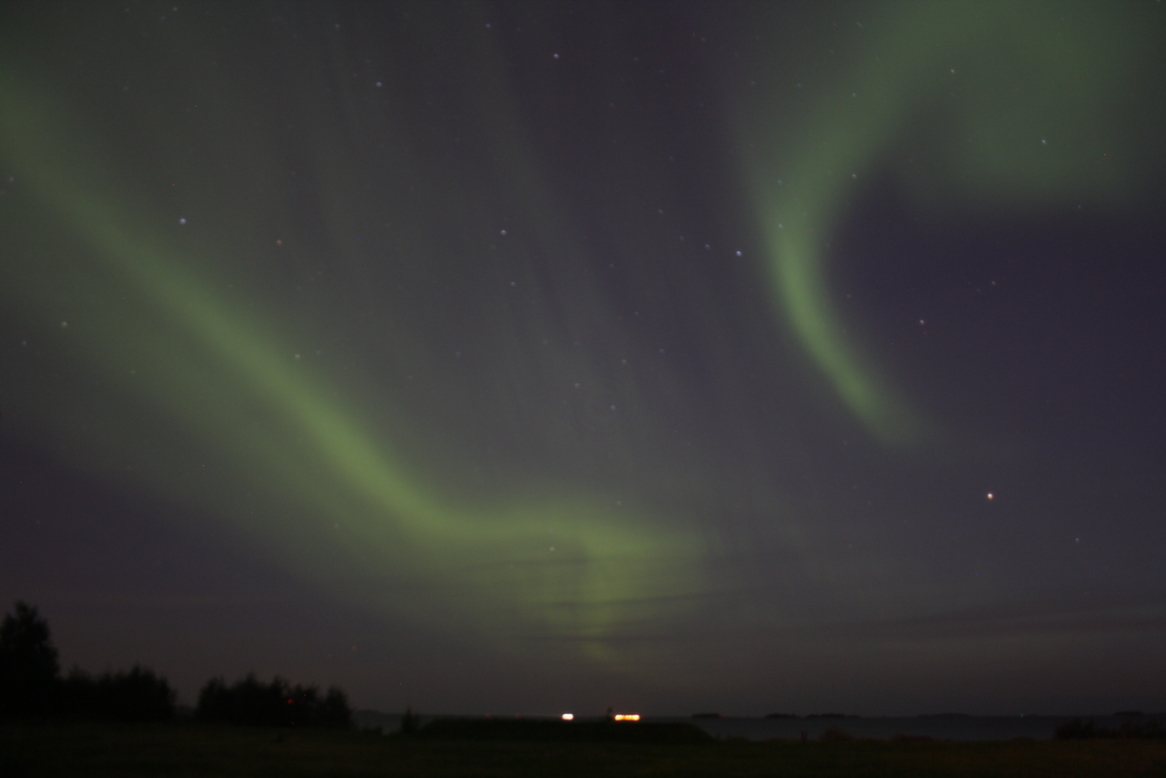 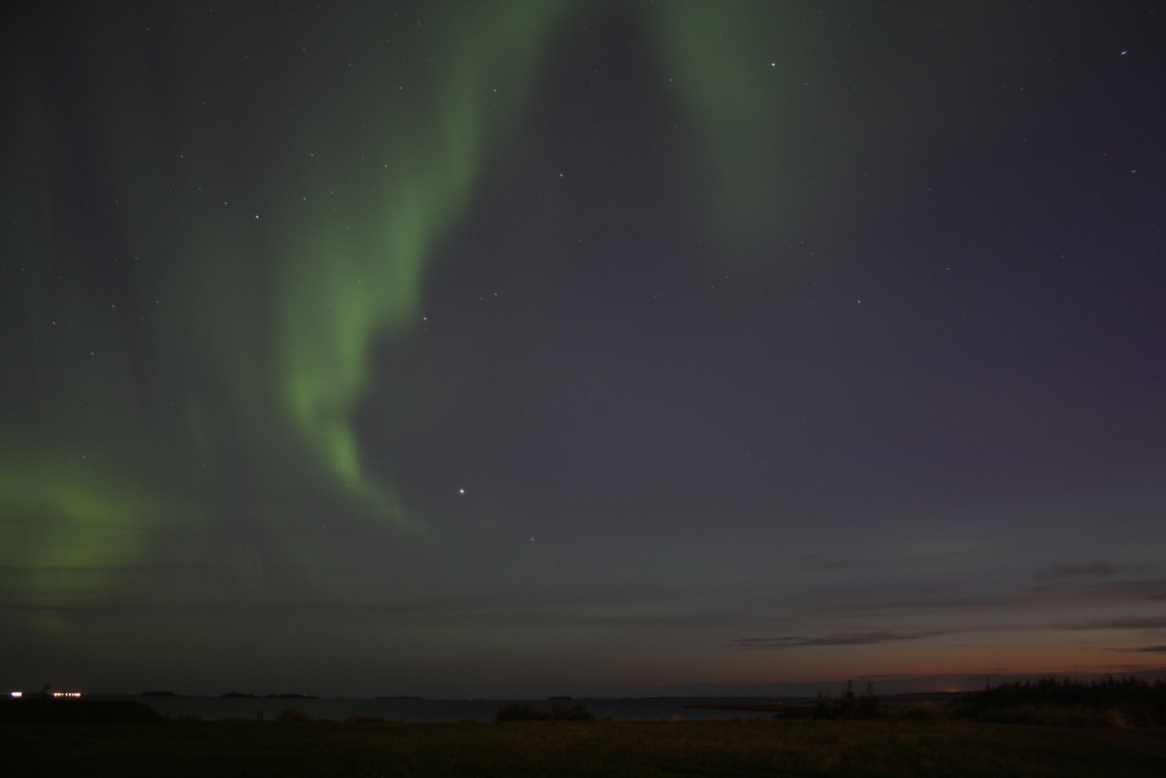 True words. After using the heater for the second time I looked up some weather statistics. The temperatures started dropping below zero already! 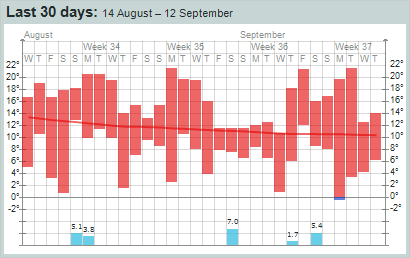 Sunset is at 19:00 and T-Shirt hours are reduced to sunny afternoons without wind which are seldom. Eva described it as “crisp” weather. I guess both descriptions are quite fitting. It constantly feels cold just as 30+ degrees constantly feel warm. It’s not exactly uncomfortable but it’s there. In some moments you think like “fuck, that’s hot/cold” but most of the times it’s alright.

The colors of autumn really make up for the temperatures. Ah, yeah, there are northern lights as well…. 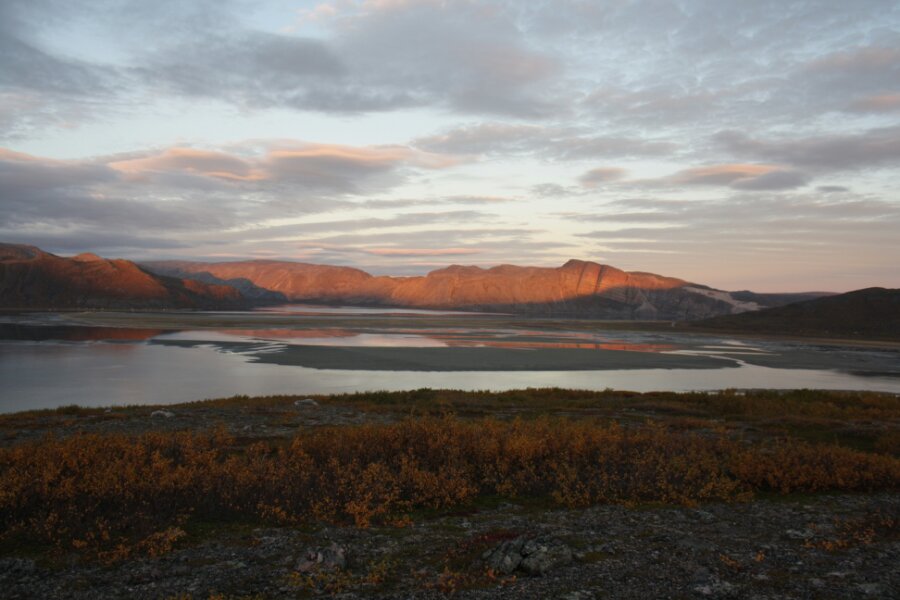 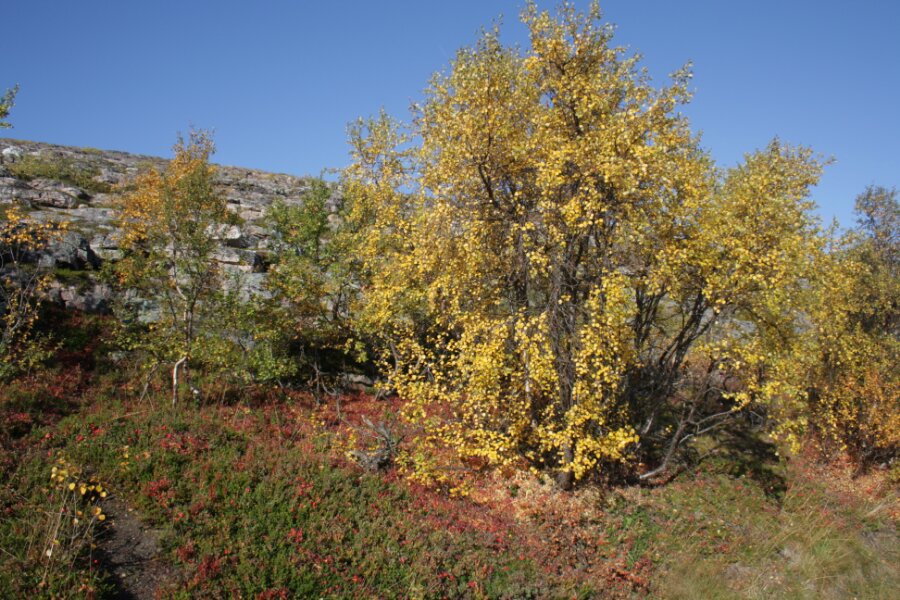 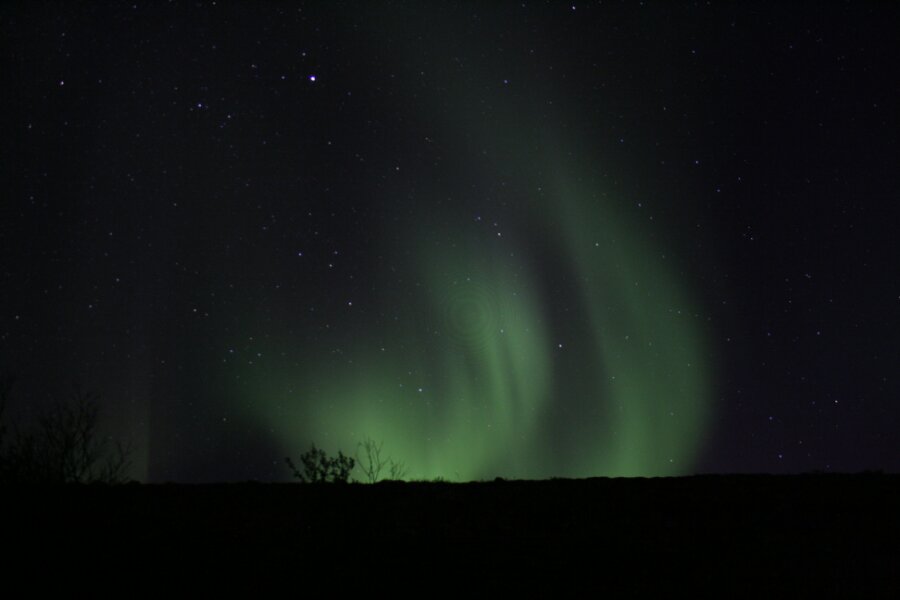 Besides that I finished reading “a song of fire and ice” and I’m quite sad that there will be some waiting until the next book is published. But maybe it’s a good thing, it really got me hooked up well so now there’s more time for other stuff. So if anybody wanted to discuss something with me now is the time since there’s no risk anymore of spoiling something…

After finishing I did some research on the author, George R.R. Martin. Fun to read, what really caught my attention was that he’s still using Wordstar 4 for writing the texts. It came out 1978, so it’s actually older than me. That doesn’t happen with software that often… Medieval software for medieval stories. As long as that’s not the reason for him for taking quite some time to finish a book I won’t blame him…

The world of word processing from the view of George R.R. Martin. thx to wikipedia for the screenshot