(this post went missing after publishing it. weird. luckily I had a backup…)

I remember watching the movie and looking up the place afterwards. Polijarny is the fjord leading to Murmansk, “the” northern harbor of the russian navy. A weird place far off in the north and east. At the moment it’s about 200km south-east of my position…

Murmansk is home to the fictional Red October as well as the quite real Kursk and some other typhoon/akula class submarines. The glory of the cold war, 175m in length, 380MW nuclear power plants, 48000 tons displacement moving at 50km/h submerged due to a whopping 100000 hp engine(s). It can stay under water for around 120 days and it’s mission is to stay hidden under the artic icecap until somebody hits the button to launch it’s 20 R-39 Rif Intercontinental Ballistic Missiles. Each of these 84 ton monsters can carry 10 MIRV warheads for a distance of around 8000km. 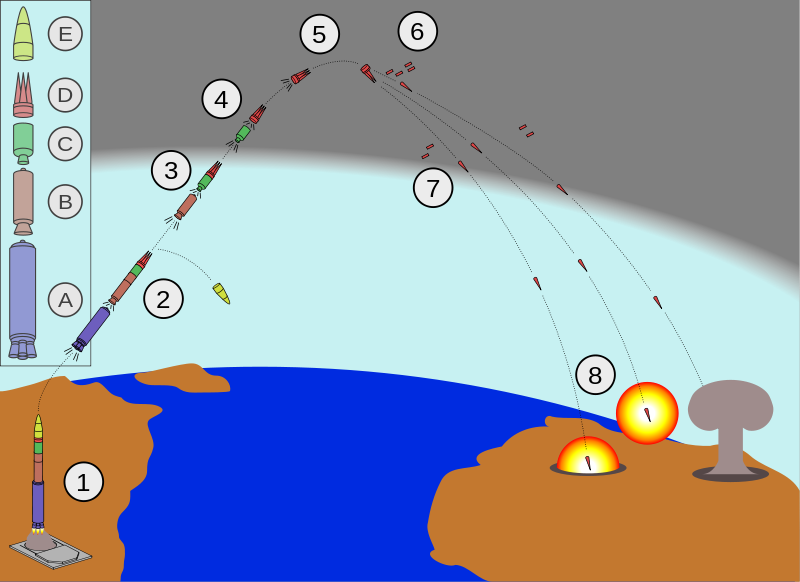 MIRV stages thx to wikipedia (look there for further description as well). In short: Launch a bundle of warheads to space and then let them drop on different targets.

It’s nuclear payload sums up to 20*10*200kt=40000 kt (kilotons) of TNT equivalent. Thats 3077 times hiroshima (13kt). No kidding. Or to put it in another relation: All (conventional) bombs thrown in WWII are estimated to a total of 2 Megatons. So one typhoon equals about 20 times WWII. Six typhoons were build so we end up with 120 times WWII / 18462 times hiroshima. And that’s only one kind of ship and one type of missile not speaking of land based stuff…

Luckily this era is over and both the subs and the missiles are decomissioned by now. What remains is this weird feeling of the amount of manpower and resources put to waste to scare the shit out of “the enemy”. Probably just enough to end all wars on earth and get everybody well fed. Nah, who would do that if there’s the possibility to fly to the moon and build weapons to kill every human being on the planet many times over? (yes, the moon rockets, the ICBMs and almost any large rocket of the times came from the team of the nazi / later US national hero SS Sturmbannführer Wernher von Braun. He let concentration camp workers build V2 rockets just at the doorstep of my hometown and was never trialed for his crimes which make me want to puke everytime I think about it).

1 thought on “Echos from the past”