The new subwoofer has bass, I’ll give it that. But sounds like a trumpeting elephant somehow. Well, it’s probably not the speaker itself. The broken crossover / connection panel is already removed. Hmm, let’s have a look at the mods of the previous owner.

He reduced the volume by adding an enclosure for the connection panel, added some foam isolation and adjusted the length of the vents. Alright, the enclosure lowers the volume (obviously), the insulation increases the (virtual) volume of the enclosure (not so obvious). Measuring inside the box is difficult, I’d estimate the volume about 70 litres so with the insulation it’s probably somewhere between 70 and 80 litres. The original vents have 75mm diameter and are 120mm long. The previous owner extended them to 350mm / 360mm using pipes from the hardware store and claims to have calculated everything with some software. 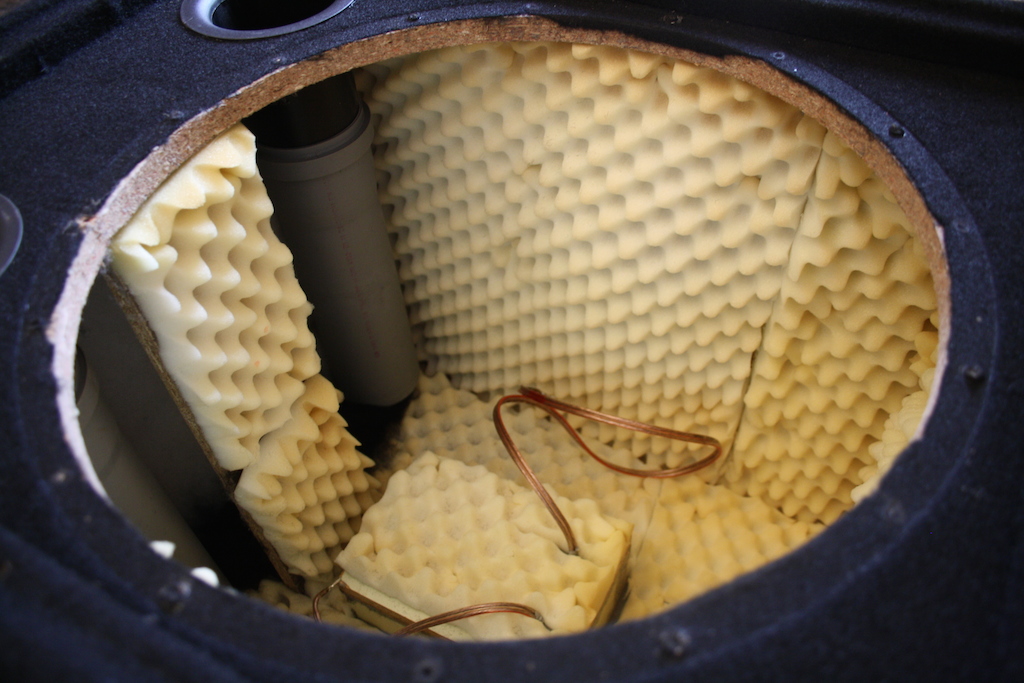 The vents should be the same length. They are extremely close to the rear wall of the box but I couldn’t find proof that this is an issue. Let’s start with the obvious: Some designer made this enclosure and even if it’s a cheapo they probably put some thought in it. The vents adjust the resonance frequency of the box. Changing them by a factor of three means either the engineer who build it was way off or the one doing the modification. I used an online calculator to run the numbers. With the extensions the resonance frequency (fb) of the enclosure is around 29Hz, without approx. 43Hz. The manual of the speaker comes with 12 suggested enclosure dimensions ranging from 36 to 50Hz fb. The interwebs suggest it makes some sense to go for a “bass shelf” by tuning fb to Fs (30,83Hz) or even lower. One formula I found suggests 31Hz being ideal for this setup.

I guess I’ll rig up a setup to actually measure the resonance frequency to check my estimates and tune the box to “optimal sound quality / flat response”.